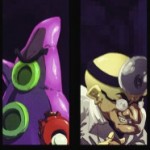 My day/night job is as a musician/teacher from Sacramento,CA. I mostly perform early Jazz styles on trombone, trombonium, marching trumpet, english baritone, tuba, piano, vocals and on occasion the saw. But when I have time to put my horn down, I am a gamer. A brief gaming history: Growing up, my brother and I being creative types with little money, would play 1000 Blank White Cards -a very fun make-it-yourself game, and Mao (or Mau) – a game played with a normal deck of cards similar to Crazy 8′s, where the aim is to figure out the rules of the game (created by another player) without talking. The first game I ever bought with my own money was a card game that someone introduced me to on the 4th of July called Lunch Money. In college I was introduced to White Wolf’s Dungeons and Dragons and even some mild Boffing. Following that a casual gaming group introduced me to Munchkin, Ticket to Ride and Apples to Apples which helped build a foundation for what would eventually become my new mania. I find that I collect a lot of different types of games now a days, but my personal favorites stem from the Horror/Fantasy genre. My older brother would lend me all his old books (H.P. Lovecraft, Arthur Machen, George MacDonald to name a few), and sometimes in the college dorms three of us would assign each other a character (including narrator) and take turns reading aloud till the wee hours of the morning. *whispers* “role playing.” Along comes Fantasy Flight and their huge catalogue of Horror/Fantasy games. This is the turning point that made me into a gamer. When people hear Fantasy Flight and Horror their brains scream “Arkham Horror!,” as well they should. But I came into the FF universe rather late in the game and the first FF game I ever played, the one that REALLY sold me was Elder Sign. The dice, the simplicity, the co-op and the suspense within the H.P. Lovecraft universe was unlike anything I had ever played. This triggered a snowball effect and I found myself buying Mansions of Madness, Arkham Horror, Betrayal at House on the Hill, and more recently Unspeakable words, and Eldritch Horror. Mansions of Madness, though I rarely play it these days, is what drove me to find “The Esoteric Order of Gamers.” You open the box and the first thing that pops into your head is “Wow look at all these cool game pieces! [Where am I going to put them?] I love the Miniatures! It’s too bad they aren’t painted…” Cut to today: I’m running multiple campaigns of Descent 2nd Edition, and have on order City of Horror, Run, Fight, or Die!, and Till Dawn. I just got Cosmic Encounter a few weeks ago and I’m really enjoying it. Sometimes I go back to my 1000 Blank White Cards roots and mix things up with custom event and item cards for Betrayal at House on the Hill, or play Dixit using illustrations from Elder Sign.