Alien: Fate of the Nostromo

In space no one can hear you scream.

I guess I’m a sucker, but slap the Alien name on a game and it’s an insta-buy for me. I’ve always been a huge fan of the franchise – the first two films especially, of course – and I love its gritty industrial scifi horror feel.

Alien: Fate of the Nostromo feels just right graphically – the first thing you see when you open the box is a screeching cat head with a tiny alien reflected in one eye, a lovely touch – but the game pulls its punches quite a bit in an attempt to be family-friendly. There’s no chest-bursting here, just constantly running away from the alien and losing morale. Hardly the visceral horror of the films: less ‘in space no one can hear you scream’ and more ‘in space no one can hear you breathe heavily after running so much.’ It’s an unfortunate choice, but luckily the variants have already started flooding in, including one (‘The Director’s Cut’) by the game designer himself, who also must have felt the frustration of his client’s restrictive brief.

The rules are simple and straightforward and consist of fulfilling simple objectives, mostly delivering items to different rooms on the Nostromo, until the players finally draw a mission card and have a last set of objectives to beat – a ‘mini end-game scenario’ if you will. Yes, the self-destruct countdown is often involved. All the while the alien will be pursuing you around the ship, eating away not at your vitals but your morale. It’s not particularly difficult, though you can add an optional Ash to make things a little trickier.

The game is quite fun and I’m glad I own it, but it’s certainly not the perfect Alien game – that still has yet to be made. Not that I’m sure it really is possible to capture the true atmosphere of seminal films such as these, given the decades of nostalgia they have accrued. But I was hoping for a bit more tension and excitement than Alien: Fate of the Nostromo delivers. 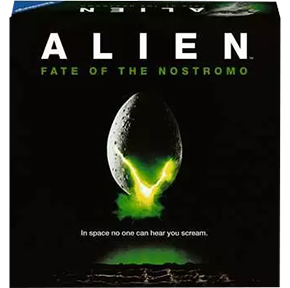