When Saturn’s mining settlement is attacked by the warmongering alien Wretcheridians, the First Fleet of the Intergalactic Space Navy races back from the edges of the solar system.

It’s about time someone made a fun spaceship fleet combat game that doesn’t obsess about the detail, and Hasbro surprisingly come up with it in Battleship Galaxies, with a very small and tenuous link to the Battleship game of old (the grid system for determining hits is the only similarity). Great pre-painted ships and good quality production could have marked the start of another money-eating franchise, but sadly this core set is all we got.

Opening the Battleship Galaxies box you might have one those ‘take me back to being a kid’ moments that gamers treasure. Inside, a lot of high quality components nestle in a well-designed plastic tray. First and foremost of course are the awesome plastic spaceships: there are twenty in all—ten for the human Intergalactic Space Navy (ISN, the good guys), and ten for the crustacean-like Wretcheridians (the bad guys, in case you didn’t guess—the comic book explains the silly name). The ships are highly detailed and fit on very cleverly designed snap-together stands that cover a number of spaces corresponding to the size of the ship—one hex size for small ships, two hexes for medium ships, and a huge six hexes for the fleet flagships, the ISN Everest and the Vapor’s Fate. The ships are pre-painted with a base coat and wash that brings out all the detail. I imagine some people will be creating custom paint jobs for these but really, they look great as is and no further work is required.

Once you’ve stopped playing with the spacecraft, check out what else is in the box. There are two 10-sided dice, one marked with numbers and the other with letters. You’ll use this when you’re rolling for hits on each ship’s unique card. There is a deck of these large cards, two for each ship, which detail three different variations of each ship (standard, seasoned, or veteran); describing its weaponry, abilities and special powers.

Two energy boards and plastic markers are used, one by each player, to keep track of their fleet’s energy use. Energy is a core mechanic of the game, and you’ll spend it to launch your ships, activate them, and fire their weapons, among other things.

Two large full colour screens are used to hide your fleets before you launch them. There are 36 illustrated Tactic cards per faction, and these detail events, heroes, upgrades, weapons and even sabotage. You can attach some of these cards to your ships (and to your opponent’s ships, in the case of the sabotage cards) to give them extra abilities.

Of course, spaceships need space to fight over. Two 4-panel thick gameboards fulfil this function beautifully. Finally, there are red and blue pegs that fit into the ship bases to track shields and hull damage, and a number of tiles to represent things like debris fields, asteroids, a warp gate, orbital market, energy sources, and more.

There’s no doubt that Battleship Galaxies is a stunning-looking game when it’s all set up. And there’s one other treat—a 48 page comic book which is very high quality and has a surprisingly engaging story. Definitely the best ‘comic book in a game’ implementation I’ve seen.

The rules to Battleship Galaxies are deceptively simple, but as soon as you start playing you’ll realise there’s actually quite a lot of potential for fun strategies and clever manoeuvring. Of course, there’s a very healthy dollop of luck as well, so don’t turn to this game for a ‘realistic’ depiction of space warfare—it’s in two dimensions for a start. This game was designed to be fun, and I can assure you after my first game that it received top marks on that score.

But first, a quick summary of the simple rules. When it’s your player turn, you start with the Energy Phase, in which you gain 10 energy and draw a Tactic card (you can hold up to 10). In the Deploy Phase, you launch your vessels by paying their launch cost in energy. Smaller ships can be transported within larger ships; so for example, you could launch the ISN Everest, the largest vessel in the ISN fleet, and then in a later turn pay the launch cost to launch the Blue Sparrow squadron (3 small fighter ships) from its launch bays. When you launch a ship, you place blue shield pegs on its base equal to its shield number.

Then we reach the Action Phase and the meat of the game. One at a time you can activate ships or squadrons (3 small ships) by paying their activation cost in energy, then moving and attacking. Ships can move up to their movement value, and fire the weapons detailed on their ship card. Sometimes weapons have a further charge cost in energy. The only rule to remember when moving is that if you fly adjacent to an enemy ship you may receive 1-3 electronic countermeasure (ECM) damage, depending on the size of the enemy ship.

Attacking is where you get a little flashback to those old games of Battleship, because if your target is in range, you roll the coordinate dice (one has numbers on it, the other letters) and read out the result. Your opponent then looks up the grid on his ship card and cross-indexes the coordinates to see if it’s a hit (grey area within the schematic of the ship) or a miss (white area outside the schematic). You’d be surprised at how much fun this old mechanic still is—and there’s always the chance the dice can hit the one box on your grid marked with a red star—which means it’s a critical hit and your entire ship is destroyed. Luckily this didn’t happen to any of our ships during our first game but the threat of instant destruction is always there, even for your flagship.

Each weapon gives you a certain number of attack rolls, and each successful hit deals an amount of damage. Normal damage is taken by a ship’s shields first (remove blue pegs), and then you start adding red damage pegs until the ship reaches its hull damage value and it is destroyed.

That’s the basic rules system in a nutshell. The addition of Tactic cards adds a lot of interest to the mix. There are one-time events, heroes, upgrades and weapons that can be ‘attached’ to ships to make them more powerful or give them special abilities, and even sabotage which can be attached to enemy ships. Some Wretch tactic cards even allow the evil aliens to make deadly boarding actions and even take control of a human ship. Give your flagship a nuclear warhead, twin rocket launchers, or a plasma cannon; or let Bronson Skiles take command to add 1 to your ship’s primary weapon strength. In addition, depending on the experience of the ship (standard, seasoned or veteran) you may have access to additional ship abilities—for example, the ISN Torrent, if adjacent to friendly ships, can increase their weapon range.

Despite the fact that we never got expansions, Battleship Galaxies hits that gaming sweet spot—simple rules that cut off all the fat, interesting options and extensions via the ship types and tactic cards, and most of all a game that is just pure fun to play. You’ll be making laser and explosion sounds, seeing the fighters zip around and through the larger ships and the huge flagships let off volleys of broadsides at each other, and desperately manoeuvring to bring as many weapons to bear as possible on the opposing ships. 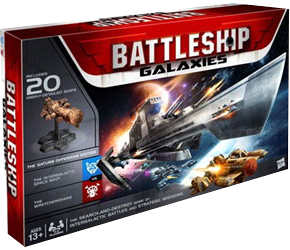