Betrayal at House on the Hill

As one of twelve mysterious characters, you’ll explore a house filled with deadly secrets

The creak of footsteps on the stairs, the smell of something foul and dead, the feel of something crawling down your back—this and more can be found in this fun and unusual game—it’s a new experience almost every time you play. Explore that ‘creepy old place on the hill’ until enough mystic misadventures happen that one of the players reveals him or herself as the betrayer and turns on all the others. Multiple scenarios and a different layout for every game cover just about every B-movie horror situation you can imagine—and then some.

This haunted house romp is pretty standard fare until the ‘haunt’ kicks in, and one of 50 unique plots pits one of the players as the Traitor against the others. This game aid booklet includes a rules summary, a set of character cards to put players in the mood, 3 versions of the Haunt Chart, and the revised and corrected Haunts plus the extra 20 Haunts offered online by the original designer. All the Haunts have been painstakingly formatted to match the graphic style of the game. Note this is all for the original version of the game, not the revised version.

Betrayal at House on the Hill Game Aid Booklet v4.2 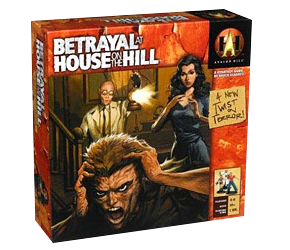