A historical board game that broadly depicts the millennia-long struggle for control of England, Scotland, and Wales.

Britannia takes players back in time to explore the history of the conquests of the British Isles. This is a fascinating and involving boardgame that traces the Roman invasion in 43 AD, through the conflicts between Angles, Saxons, Picts, Norsemen, Scots, Irish, and other tribes, finally all the way to the Norman invasion of 1066 AD. There’s a certain amount of pre-scripted activity to keep the history roughly on course, but players still have the freedom to change the history and explore what could have happened. If you can never remember the difference between Angles and Saxons and Picts, this is the game for you. Set aside a long afternoon and some dedicated players, and the game will definitely be rewarding.

This rules summary has a generic front side, and specific back sides for each of the four player colours. 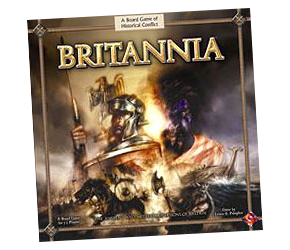