Call of Cthulhu: The Card Game

Join the fight against otherworldly beings including Cthulhu, Hastur, Yog-Sothoth, and Shub Niggurath.

The same game as Call of Cthulhu Collectible Card Game, but re-released in non-collectible format and now with white card borders (though personally I preferred the black).

Call of Cthulhu Collectible Card Game was FFG’s first duelling card game and is still going strong many years later as a Living Card Game. Designed for two players, it draws on the rich and detailed background of the stories of master horror writer H.P. Lovecraft, pitting human and monster factions against each other in a game where you can not only lose your life, but your sanity! Agency detectives, Miskatonic University students and faculty, and the members of the mysterious Syndicate all join the fight against otherworldly beings including Cthulhu, Hastur, Yog-Sothoth, and Shub Niggurath. The cards feature some truly stunning artwork from a wide range of artists that really immerse you in the theme.

The place to start with this game is the Core Set, which includes a nicely-illustrated game board, rulebook, story markers, plastic Cthulhu domain markers, 10 Story cards, and 155 deck cards. Call of Cthulhu: The Card Game is fully playable out of the box, but when you get hooked you’ll want to start expanding the game with any number of booster Asylum Packs of fixed card supplements and larger boxed expansions. 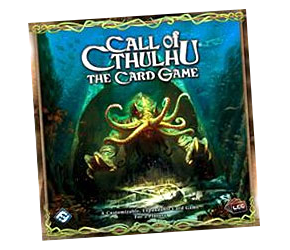