Doctor Who: Time of the Daleks

I’m sure it’s been said many times that you can guess the age of a scifi fan by finding out their favourite Doctor, so I’ll really seem old when I tell you it will always be Tom Baker for me. That period of the show, while obviously dated now, struck a perfect balance between humour and horror, and Tom’s pure force of personality drove the show forward even in the most slow episodes, really making you believe that the Doctor was a weird, brilliant – and just a little bit scary – alien.

The new generation of Doctors have all been fine in their own ways too of course, though I have cringed sometimes at the breakneck pace of the modern episodes and the way UK TV producers seem to have some kind of special talent for making programmes that look a bit, well, cheap.

But enough of that, I can hear a million geeks crying out in anguish (to mix my scifi culture metaphors). Here we have Gale Force Nine’s Doctor Who game, Time of the Daleks, first released in 2017 and re-released (with the addition of the 13th Doctor and some better quality components) in 2021. And for you Doctor Who obsessives out there, this is going to be a no-brainer addition to your game collection. I did enjoy painting the very nice miniatures – especially the different colour bands on Tom’s scarf (hold on, did I say I wasn’t obsessive?)

There’s nothing particularly revolutionary here mechanics-wise: as one of the Doctor’s incarnations you travel to locations and time zones taken from episodes of the show, make up a dice pool from companions, items and various cards, and roll them to beat symbol challenges. Those companions and items can then help to modify your results in your effort to match the symbols. Failure or success gives you rewards, and usually changes the relative positions of the Dalek spaceship and your Tardis marker on a ‘time and space track’ heading towards Gallifrey. It’s mostly co-operative, as players can aid each other in the dice challenges, but the first Doctor to Gallifrey wins, so there’s a bit of competitiveness in there too, which I appreciate.

While the gameplay is fine, the real fun here is being immersed in the theme and recognising the various episodes, items, and characters from the show – I can’t imagine how much work went into researching all the episodes and photographs! For a casual fan like me all the references became a bit of a blur, and when I played with a non-fan the experience fell flat, but die-hard Whovians are going to love this game. And let’s face it, if you’re not a fan of the show, why would you get a Doctor Who game anyway?

Doctor Who: Time of the Daleks Rules Summary & Reference v1 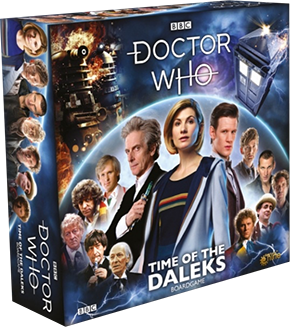