Dungeon Bowl came out as a Blood Bowl variant back in 1989, and after one expansion it disappeared. But now it’s back in this lovely new edition, which features two fantastic teams of varied models, some gorgeous dungeon tiles, a hardcover rulebook, and everything you need to take the Blood Bowl experience underground.

I haven’t had a chance to take it for a spin yet – I want to paint up those teams first to get the full experience – but I look forward to a crazy game of random mayhem and madness, quite similar to vanilla Blood Bowl, but with the ball bouncing off walls in the cramped confines of the dungeon and the ever-present threat of a number of special rooms and traps. And that’s after you actually find the ball, which is hidden in any one of a number of explosive chests!

Instead of teams based on fantasy races, we have teams based on colleges of magic made up of a selection of figures. Which is probably a clever way of not letting you use your existing Blood Bowl teams, but it does introduce some nice variety to the game.

It’s great to see Dungeon Bowl come back with such a high quality set. The rules are quite extensive, but this rules summary and reference should make things a lot easier to learn and play the game. It’s time for kick off! 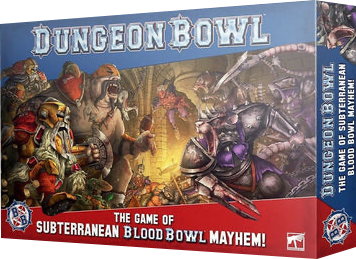