Only a few have ever returned from Dragonfire Dungeon, and those who have usually come back near death.

This notoriously difficult game—it was easy to get into the dungeon, but getting out alive was another thing entirely—was originally Swedish and went by the name Drakborgen. Games Workshop released their own version in 1985, it became a bit of a classic, and a lot of people were very excited about this 2010 Fantasy Flight Games re-release.

Dungeonquest put a twist on the genre by not only instigating a time limit to the adventuring, but a push-your-luck element where you can try to steal more and more treasure from the sleeping dragon at the heart of the dungeon—at the increasing risk of it waking up and killing you, that is! FFG have now set the game in their own fantasy melieu of Terrinoth and updated some of the mechanics—some say the combat system is bolted on and too complex for what is really a beer-and-pretzels game—but it’s still a very fun (and deadly) bash. And if you don’t like the new combat system, this summary includes the old version as released by FFG afterwards. 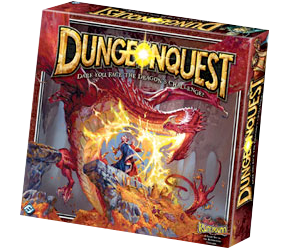