Back in December 2014 I supported a Kickstarter campaign called Fireteam Zero on a whim, and I’m happy to report that not only is the core game finally here, but the expansions are on their way soon. It’s taken a little while, but newcomer Emergent Games has delivered an attractive package of alternate-WWII/horror, with some suitably scary (if a little bit soft on detail) figures and nice design. Oh, and a CD – a CD? … never mind, digital downloads are available from the website – which narrates the mini-campaign beautifully and adds evocative background music, which is a nice touch.

There’s nothing particularly revolutionary here, but the elements come together with gusto, evoking games such as Doom: The Boardgame and Gears of War (the game uses the latter’s ‘cards are your hit points’ idea). Your squad members have separate decks of cards with different specialised tactics, which adds a fun layer to the proceedings.

Be prepared for a rough ride though; the beasties spawn at the end of every turn and their AI generally consists of charging at you and eating your face, so the combat is relentless. While you’re fighting them off, you’ll be searching areas in an attempt to achieve a sequence of objectives. I look forward to checking out the expansions to see if a bit more variety has been introduced to the core concepts, but if not, there’s still a lot here to enjoy for fans of the genre. 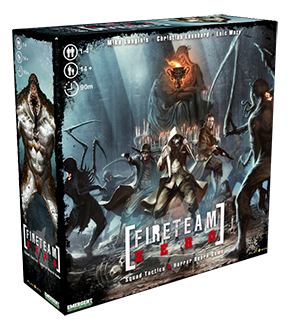