The last Galactic Emperor has met with a sudden and quite fatal accident.

Often called ‘Twilight Imperium-lite’, this first game from small publisher Crosscut Games (their second game was Ninjato, published by Z-Man, for which I did the graphic design), is an excellent mix of space empire building and Puerto Rico-style role selection. The game features has seven roles to choose from each round: Explorer, Steward, Merchant, Engineer, Warlord, Regent, and Scientist. As in Puerto Rico, the player who chooses a role gets a special benefit, while all players can take the action associated with the role; and the roles range from goods production and accessing technology to political influence and combat.

An excellent choice if you have limited time in which to conquer the galaxy. 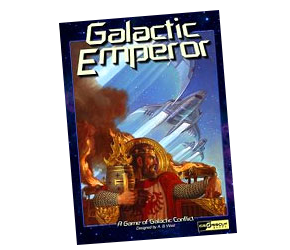