Welcome to the biggest sport of the future!

This surprise collaboration between Weta Workshop (of Lord of the Rings movies fame) and Cryptozoic appeared out of the blue on Kickstarter and immediately got gamers excited. The game certainly looks spectacular, with huge, beautifully designed giant robots stalking among tall buildings, though I’m not a particular fan of the comic book art style, which seems to be trying a little too hard to be streetwise. At the time I decided not to back it because I wasn’t too excited about the gameplay, but when a copy of one of the Kickstarter pledges came up at my local suppliers, I couldn’t resist.

And for the most part, the game is enjoyable, if a little lacking in depth. There’s a little bit of card manangement thrown in as you build your weapon deck and decide which of them to use. The weapons are suitably over the top and destructive, and the three types of support units mix things up a bit. I’ll definitely get this one to the table when I feel like a bit of giant robot combat (which happens occasionally, you know?), and I really hope Weta turn their vast creative resources to creating lots more beautiful boardgames in the future. 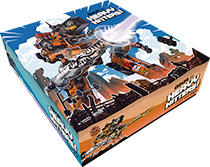