There are dungeoncrawlers by the score in my collection, so I was interested to see what all the fuss was about when I finally played Gloomhaven, the wildly popular Euro-style fantasy campaign game. A dungeoncrawler without dice? How could there be such a thing?

And after a game, I still have to admit that this style of game doesn’t excite me. I had the same reaction to Mage Knight—I simply don’t enjoy the slow puzzle-solving style of coming up with card combinations applied to a genre in which I think much of the fun is in the unpredictability of the dice.

But there’s no denying I’m in the minority, and both Gloomhaven and Mage Knight are incredibly popular games among those people who seem to really dislike those dice dictating their fate. The recent Kickstarter campaign for Gloomhaven’s sequel, Frosthaven, raked in thirteen million dollars and proved that decisively!

Gloomhaven has a campaign system that includes legacy elements such as applying stickers to the world map, and an action system that, in essence, involves choosing two cards from your hand each turn, but all the other elements of a campaign dungeoncrawler are here, complete with character miniatures, specialised character progression, board tiles and scenarios, in a huge, very nicely produced package.

I seem to be damning Gloomhaven with faint praise, but it really is just because it doesn’t personally click for me; I do appreciate the incredible amount of devotion and invention that has gone into the game, and how popular this style of game is for many people, especially those used to more Euro, no-luck games with themes such as town building and economics, who get to go adventuring in a fantasy world for a change!

It seems ridiculous for a website like mine with its focus on fantasy and scifi games not to have a rules summary for one as popular as Gloomhaven, and in addition, this is the first summary to be voted by my Patreon supporters as being of top priority. So I’ve distilled the 52 page rulebook down to 4 pages, without leaving any rules out. If your tastes run to fantasy adventuring campaigns without dice, enjoy! 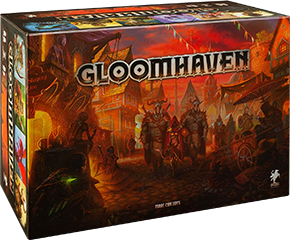