Play as the Earth’s most fearsome Kaiju battling for dominance.

Another in the amazing run of great 2020 Prospero Hall/Funko Games games is Godzilla: Tokyo Clash. There have been a few kaiju (it means ‘strange beast’—that’s giant city-destroying monsters to the uninitiated) games in recent years, but the couple I’ve played haven’t impressed me as much as the old Monsterpocalypse by Privateer Press (which was also a bit too fiddly and complex). But while I haven’t got this one to the table yet, it looks like the perfect fast-playing alternative. It’s a card-driven system that lets you choose a famous kaiju—Godzilla, Mothra, King Ghidorah, or Megalon—throw vehicles, smash buildings, and attack your kaiju opponents. And unlike other games in this class it stays to the original 1950s/60s Japanese movies source in both setting and style.

There’s some card management here—you can cycle through your deck to get the right combos and build ability enhancements onto your player mat—and each kaiju has their own abilities and play style. I also love the way the actions of the military are controlled by new event cards each round, keeping this usually pretty static aspect of the genre much more fresh and interesting. Your currency for card play is powered by energy, which you gain by smashing buildings and vehicles. Finally, you win by having the most dominance, which is scored when you attack and defeat other kaiju.

It’s a clean, sharp system beautifully complemented by top class graphic design, artwork, and production. The perfect balance of colour and type choices, a huge amount of dramatic, period-style artwork, and just that little touch of retro graphic wear is all a pleasure to behold. There are typically thoughtful design touches like matching the shape of the token to the shape of the slot it goes into in the bottom of the building, eliminating confusion for this one-time task. And everything is high quality for a remarkably low price; the kaiju miniatures even have a bit of a dark wash to bring out the detail. I really think Prospero Hall is providing some of the highest quality graphic design and best value in the boardgame industry right now.

The only criticism I’ve heard about Godzilla: Tokyo Clash is that it doesn’t play as well with just two players, but I will put this theory to the test and let you know. In the meantime, this seems like everything I want from a fast, fun, giant-monsters-smash-through-a-city game. Let the rampage begin! 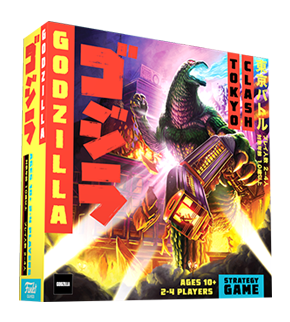