Another classic old wargame, first released by Avalon Hill in 1996 and now back in a beautifully designed edition by Valley Games. Hannibal: Rome vs Carthage is a somewhat complex counter-and-map simulation of the Second Punic War from 218 to 201 BC when the Carthaginian general Hannibal came close to defeating the might of the Roman Empire. Famously, Hannibal drove war elephants with his army over the Alps to invade Italy, and so can you if you play this involving game – but you’ll have to wield political control as well to achieve victory.

It has some modern elements that were later to become game standards, like card-driven actions and combat. Some lovely graphic design by Mike Doyle, though it’s a shame he didn’t design the board as well. 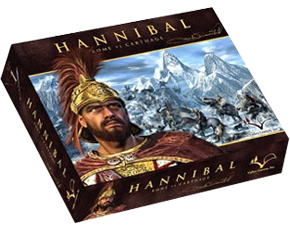