The battle on Holy Terra between the traitor Warmaster Horus and the Emperor.

One of the trilogy of counter wargames produced by Games Workshop in the early nineties. Furious battles between the Chaos hordes of the traitor Horus and the armies of the Emperor in the Games Workshops’ Warhammer 40,000 universe. A old-style game in the ‘cardboard counter wargaming’ tradition.

I haven’t played a game like this in a while—cardboard counters and attack/defense ratios no less! This ol’-fashioned wargame was brought out by Games Workshop in 1993, and it’s been sitting unplayed on my shelf ever since. A friend and I finally gave it a run last night and it turned out to be a lot of fun. For those of you who remember the style, you ‘stack’ cardboard counters with attack, defense and movement numbers on them, and move on a board divided into areas, in a bid to outgun and outwit your opponent. Combat is worked out on a table where you cross-index the attack/defense ratio with a d6 roll. In this case, the whole thing is wrapped up in the atmosphere of a Chaos invasion of a planet and the attempt of the Chaos leader Horus to thow down the Emperor. Goodies versus baddies, in a nutshell.

What makes the game interesting is the way the waves of Chaos attackers land from orbit to batter the Imperial defensive positions. The Horus player has to secure a spaceport or two early on in order to ensure the bad guys keep coming. The Imperials can shelter behind walls and try to wait it out—walls decrease your odds of successfully attacking considerably, and the game is only five turns long—but eventually those waves of attackers are going to topple the walls, so it’s not much of a strategy. The atmosphere is thick, and it’s easy to imagine huge Titan robots battering at the fortifications, and hordes of gibbering creatures pouring through the breaches.

Inevitably a dice-heavy game like this has a high random element, but this was never a game for ‘realistic’ wargamers, just a fun, atmospheric return to those days before miniatures; and to me there’s nothing more enjoyable than a hard-fought game boiling down to a few crucial dice rolls! You may want to institute a few house rules though, especially since the rules are not the clearest. We decided to allow players to set up the order they would receive Special Cards, which give players special abilities, rather than draw them randomly, for example. This means that if Horus gets a lucky hit on the Emperor with a bombardment, the Imperial player could play a Heroic Sacrifice card, throw some poor lackey in to take the bullet, and your game isn’t over before it’s started. 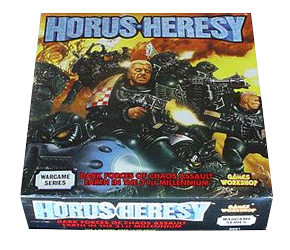