Work together to defeat the terrifying Xenomorphs.

My gaming buddy Dylan has recently caught the summarising bug, so here—after a graphics pass and some slight editing from me—is his first published summary on the EOG. Not only that, I roped him in to write me up the following blurb because I’ve only played this game once, long ago. Take it away Dylan!

Legendary Encounters: An Alien Deck Building Game, is the first of the Legendary Encounters games to apply the Legendary: A Marvel Deck Building Game system to a familiar IP, later followed by Firefly and X-files themed versions. Each game has its own small changes from the basic formula to make it fit the theme. (Unfortunately they didn’t get any more creative with the horribly long and explicit naming conventions.)

Choosing one of the Alien movies to play through (or you can do a weird movie mash-up if you like), you play as a cast of four characters defeating aliens and completing objectives until you get to that final scene where there is just one more alien to kill. The theme is pretty thin really, but if you apply some imagination you can create some tense and exciting moments. The game is pretty light deck-building fare that will not put you deep in strategic considerations, but that’s actually why I like it. It’s easy to play, follows an interesting story arc if you enjoy the movies, and offers a string of simple but meaningful choices.

I’ve almost exclusively played this solo, with only a few two-player games, though I would love to try out the ‘hidden agenda’ optional rules with multiple players, that see one player secretly working for the Company to sabotage the mission!

I don’t think this is the most thematic game, or the best deck builder, but despite that I find myself drawn to play it again and again, because it is a fun romp through some Alien action! 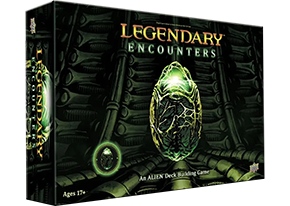