I’m not usually much of a comic superheroes fan so I bought this on impulse, largely because it’s the same team who made the excellent War of the Ring. It’s an interesting game, but it seems to get too tied up in its somewhat clunky mechanics and sacrifices the fast and furious fun that a superheroes game should feature. Maybe it’s more fun for comic fans. 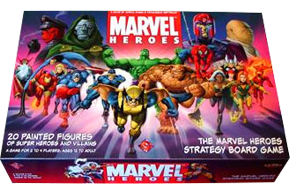