A strategic boardgame of inter-planetary conquest.

’m a great fan of illustrator Greg Broadmore’s satirical steampunk universe of Dr Grordbort; I own all the books and a collection of the miniature raygun replicas. Broadmore works on films such as District 9 and King Kong for Weta Workshop, but Dr Grordbort is his personal creation – a alternative history colonial-era Britain out conquering and colonising the pesky natives of the solar system with extreme prejudice, and a very funny satire of 1890s-1940s pulp fiction.

It’s the perfect setting for multiple games, and Martin Wallace’s Onward to Venus is a good start. The planets of the solar system are laid out in a line, and in each of the three periods of the game, various tiles are placed on them. Players then use their military units to build factories and mines (and other tiles) and occasionally capture them from other players. There’s a nice selection of wonderfully illustrated cards that add a lot of flavour. It is strange however, that the most thematic and interesting aspect of the game – the special crisis effects that can trigger on various planets – is not one that actually seems to happen very often. I would have liked to see more of that kind of thing and not so much of an emphasis on tile-taking.

There’s definitely still room for a more epic treatment of the universe of Dr Grordbort, but until that happens this is still a good game and definitely worth playing. 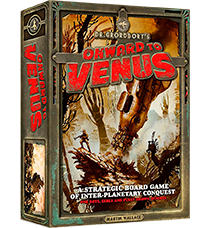