Think fantasy football games and the venerable Blood Bowl first comes to mind, though Blitz Bowl, GuildBall, Myth & Goal, and Mantic’s own Dreadball are also contenders. It’s a crowded genre, and I personally wasn’t looking for another past Blood Bowl. Then Mantic sent me a copy of OverDrive. Only 3 miniatures a side? Weird scifi theme? Let’s check this out …

And this sure ain’t Blood Bowl. This is a fast, furious, fun game with a heap of play modes that leaves its grandparent looking like, well, a grandparent. I’ve only played the first mode, but the game immediately shakes things up by having a scoring zone that moves around the board every time, a brilliant rule that ensures the situation on the board is always in flux. Sure, you can slam other players and take them out of action, and it gives you a point, but they come back again next turn. And the scoring system is a ‘push me, pull you’ track where points are totalled at the end of each round (or ‘push’, as it’s called here) and the marker is moved by only the difference in scores.

There’s a lot of innovation going on here, that isn’t immediately apparent until you finish reading about the basic ‘roll an ability test and add modifiers’ mechanics, and actually play the game. Then the rules fade into the background and the actions starts. Keeping track of flank and rear arcs becomes intuitive, the modifiers are minimal, and you’re thinking ahead to not only grab a spot in the scoring zone, but to set yourself up to be in a good position for the next rush. Each player has abilities that give them a distinctive play style, and each also has a once-per-rush OverDrive ability that can really shake things up if used at the right time.

This is just the beginning though! There are pass the bomb, capture the flag, killing streak, invade, and dodgebrawl modes, all of which shake up the formula completely and put the emphasis on different styles of play.

It’s really surprising how much game there is in this box. Move quickly past the usual underwhelming Mantic presentation (all their games lately have a slipcover and a plain brown box with everything just thrown inside, and some instructions for building and basing the miniatures would have been useful) and OverDrive is a hell of a game. Blood Bowl is really looking old and slow by comparison, but then, it’s a different beast altogether. Looks like there’s still a lot of room in the fantasy football genre for innovation after all! 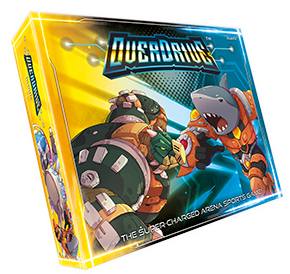