A game of bounty hunters, mercenaries and smugglers

Let’s face it, the best thing about Star Wars is Han Solo, and the best thing he ever did was shoot that Greedo guy under the table. You can keep your lightsabers and force powers, give me Jabba’s throne room and the guards who look like orcs and all the grotty mismatched mercs scraping a living any day. So it’s great to see a game set in the ‘outer rim’, even if that does make me think of toilet cleaning, and I already have a game of doing jobs for criminals in space: Firefly: The Game.

FFG recycle their Star Wars artwork yet again for another game set in Lucas’s—or should I say Disney’s—universe. The game is enjoyable enough though after an initial couple of games it hasn’t left the shelf since. The 2-3 hour playtime overstays its welcome a bit, and I was a little underwhelmed by both the slightly bland graphic design and the ungenerous amount of content in the box, after paying NZ$130 for what is pretty much just a few sheets of cardboard and some cards… I’m starting to feel like every time I buy a FFG game I’m also buying a lot of space in the box to fill with the inevitable expansions.

But yes, despite my griping (in the immortal words of Lambert, “I like griping”), I did go and buy the long-awaited and appropriately-titled expansion Unfinished Business. I still haven’t got the game back to the table yet, but there’s a lot of new stuff which looks like it pads out the base game nicely. So it might be time to head back to the Outer Rim! 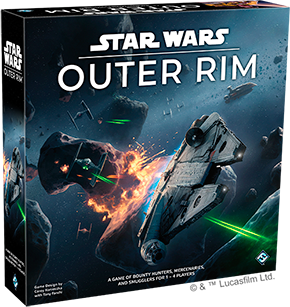