Embark on a journey through magical lands, as you endeavor to reclaim the Crown of Command.

Some call it a classic, and early original editions cost a mint on eBay, but I’m sure a lot of the hoopla is due to nostalgia as Talisman is a pretty uninspiring roll-and-move fantasy boardgame. Still, after a few drinks it can still be a laugh. After a remake by Black Industries, Fantasy Flight grabbed the licence and has done a great job with the revised fourth edition, finally adding plastic character figures and subsequently, some fresh new expansions. 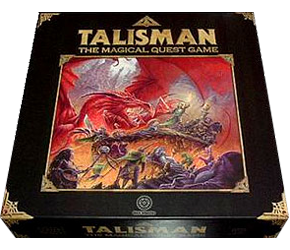