Battle as Loki or Thor as these brothers rekindle their rivalry to contest the throne of Asgard.

Originally released in 2000 by KOSMOS as Hera and Zeus, this satisfying card game from Richard Borg (of Command & Colors fame) has been given a Norse coat of paint and some tweaks by Z-Man Games.

I’m not a great fan of the somewhat garish illustration, but the game is a lot of fun. Playing as either Thor or Loki, you play your cards into 4 rows of 3 cards each, challenging your opponent’s cards in the front row. Since your cards are played facedown, you never know quite what you’re confronting when you make the choice to challenge. Throw in a large number of cards with special powers and the chaos and strategy begins. An excellent card game for 2 players. 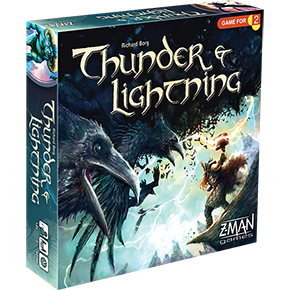