I’ve been promising to create a rules summary for Twilight Imperium for some time – in fact when finally I sat down to do this one I realised I’d already almost completed a third edition summary, and had to redo it from scratch! While the game is considered a bona fide classic, however, I’ve never personally played it, or owned a copy of any of the four editions.

That’s not because it isn’t a good game. Sure, its main mechanic is lifted wholesale from Puerto Rico, but when it comes to long, involved, deep space empire-building games there’s no other game like Twilight Imperium. It was Fantasy Flight Games’ first big hit and the flagship of the company in its golden days. But getting a large group of players together willing to commit to almost an entire day’s gaming has always proved too difficult – and certainly too rare an occasion to justify the game’s price tag.

So while I still don’t own a copy, what better way to mark my 400th rules summary – yes folks, I’ve done FOUR HUNDRED of the things, an amount of work that I can’t even comprehend – than to finally gift you with a Twilight Imperium rules summary and reference. Please note however this is in no way comprehensive, or as is my usual habit, a replacement for the rulebook. The reference guide for the game is some 44 pages long, and I didn’t set out to record every nuance of it here, so you’ll still need that book by your side when you play. My summary may come in handy as a refresher for the basics however (it also includes the rules from the expansion Prophecy of Kings).

Enjoy building your space empires – in the meantime, I’ve already started working on the next hundred summaries… 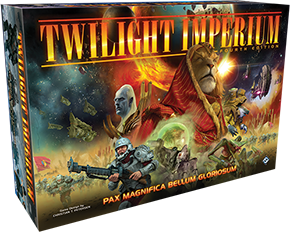