The cost of victory is blood, the cost of defeat is everything.

One of the early Fantasy Flight Games updated to fit Games Workshop’s Warhammer world, Warhammer: Diskwars is a strange beast; a miniatures game without miniatures. Instead your armies are made up of different-sized cardboard disks, which you move by flipping end over end and ‘pinning’ enemy disks to deal damage.

Sure, it’s a lot faster and easier than constructing, painting and fielding armies of fantasy figures. But on my first play I found it all a bit lacking in excitement. Possibly it’s because I haven’t yet explored the possible strategies that come from getting to know the strengths and weaknesses of your units. Certainly Warhammer: Diskwars would be excitingly different to someone who has never played tabletop miniatures games. But I couldn’t seem to shake the cold reality that I was merely flipping circles of cardboard, rather than sending mighty armies into bloody conflict. Still, it’s light, quick and pretty fun, which is much more than can be said of a game of Warhammer …

There’s quite a lot to play with in the box (it’s only cardboard after all)—decently-sized forces for the Empire, Orcs, Chaos and Elves. Expansions sets are already on the way that will allow you to field Wood Elves, Lizardmen, Dwarfs, Dark Elves, Skaven and Vampire Counts. 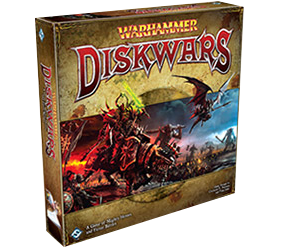