The Games Workshop series of Warhammer Quest games continues with Cursed City, featuring adventures in the city of I mean Ulfenkarn. It’s a nice set of miniatures with a far more Old World, even Gothic feel than the high fantasy of Silver Tower, though there are quite a few ‘filler’ miniatures like rats and bats and ‘mysterious objects’. As for the rules, GW continues to tweak the activation dice assignment formula first introduced in the latter game. It’s not a system I’m incredibly enamoured with, but it works fine, and I’m pleased to see at least that in this case you don’t have to roll and cross-index on a table for every single adversary miniature like you did in Blackstone Fortress.

The main criticism people seem to have with this game – apart from the strange initial release which sold out right away, leaving most of us waiting a long time for the reprint – is that the combat is very melee-focussed, and constantly hacking through hordes of regenerating zombies and skeletons can get a bit grindy. Still, there’s some nice stuff here, some story paragraphs to break things up, a campaign divided into several different types of ‘journeys’ (a strange word for an expedition into a haunted city) and some climactic battle scenarios. Whether I’ll ever devote the time to getting through it all is doubtful, but I see these more as fun, attractive beer and pretzels games for a bit of monster bashing and dungeon crawling now and again, rather than something to which I’ll devote a long series of game evenings.

Check out my video where I run through a few turns, and also look at the expansion, Nightwars.

And by the way, if you find the core game a bit of a slog and the enemies a bit samey, check out this amazing rework by Peter Cooper on Boardgamegeek. 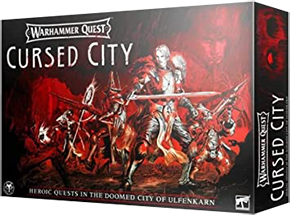