A dynamic miniatures game set on the frontier in a dystopian age.

Wild West and steampunk may have been ill-served by popular culture (let’s just forget about that 1999 film) but it’s undoubtably an excellent theme for a tabletop miniatures game. The leader in this genre is Wild West Exodus, first launched in 2015 and now part of Warcradle Studio’s ‘Dystopian Age’ line, and thus sharing the alt-Victorian background and factions of Dystopian Wars.

The brand new 2 player starter set Showdown at Redemption features two solid factions – the Union and the Redemption – and a generous amount of miniatures full of character that I found fun and easy to paint. Add some measuring devices (the same as the Dystopian Wars ones), a rulebook, dice, campaign booklet and decks of cards, and you have all you need to start shooting ’em up in the Wild West.

Though it’s great value, I do have some criticisms – I wish Warcradle wouldn’t put two options on the cards but then force you to spin them 180º to read the other option (it’s frustrating during play), and the rulebook is somewhat wordy and confusingly organised. Luckily, I’m here to solve that second problem completely, with my comprehensive rules summary and reference! There is a huge amount of fascinating background material in the rulebook though, so you can fully immerse yourself in the details of the milieu.

The system plays very well, and relies on a card draw with each activation that gives you a number of action points; since each character also has their own limit to the number of actions that can perform in an activation, this adds some interesting choices to the gameplay. Tests are a simple system of rolling a D10, adding your attribute and modifiers, and trying to beat a target of 10. There’s also a fun array of conditions and actions that capture the western flavour: hunkering down, going on lookout, and diving into cover, for example. As mentioned, a similar card play system to Dystopian Wars allows you to buff your rolls with cards, interrupt your opponent, or trigger extra activations; or you can trade in cards for extra victory point achievements. The game is very thematic and cinematic, we had a great time, and I’m really looking forward to trying out some of the other factions and expanding these ones.

I’ve also gone to the trouble of redesigning the unit cards for all the forces provided in the starter set, making the layout clearer, describing the special abilities, and organising the abilities into categories, all to make play faster and easier. Good luck pardner, and shoot straight from the hip! 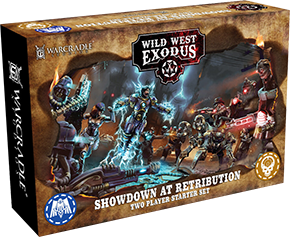