A game of money, guns and booze set in Prohibition era Chicago.

Gale Force Nine has been going great guns lately, so it’s good to see their 2014 release Sons of Anarchy: Men of Mayhem get a more general Prohibition-era gangsters theme and a rules brush-up and become available once more as Wiseguys. The new theme fits this game of area control perfectly, and I think it’s a smart idea to have the game move beyond a specific IP with its biker gangs, booze and drugs, and become more palatable to a wider audience.

We do miss out on the little plastic guns and duffel bags this time around, but they were completely unnecessary extras. The game design remains excellent, with players muscling in on territories, selling booze, growing their gang, and hoarding cash behind their player screens. The selection of locations and Roaring 20s event cards bring the theme to life, and the artwork and production is simple and lovely. A bit of character has been added to the ‘made men’ (‘members’ in the older game) by giving them variable bonuses for slugging or talking at locations. And as in the original game, you can sweeten the whole deal with as much player deal-making and manipulation as you wish.

Frustratingly, the current wave of covid in New Zealand has made it difficult for me to get multiplayer games to the table, but as soon as I have the opportunity I’ll be filming a review of this one. In the meantime, here’s my rules summary and reference so you can get started. This is one time when the gangsters have gotta play by the rules! 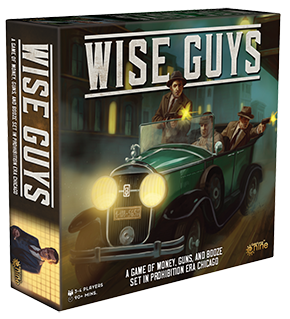