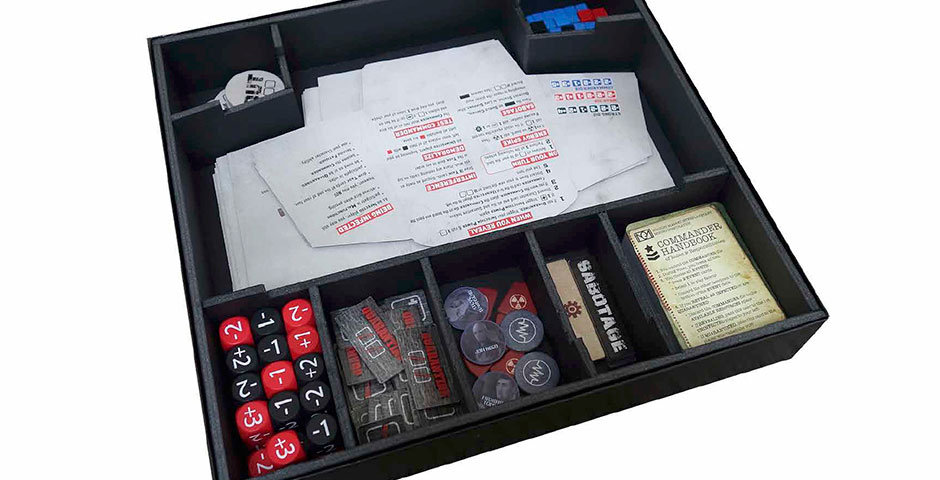 The company hired me to dig as much ore out of this hellhole as possible.

Keep the infected and the uninfected separate with this foamcore box insert design for Dark Moon.

I’ve played a few games of Dark Moon by Stronghold Games and it’s become one of my favourite ‘hidden traitor’ mechanic games. In our last game we extrapolated an hilarious story of one of the players locked behind a glass quarantine door, desperately protesting his innocence until the big reveal when he turned into a writhing mass of flailing tentacles. Another player was locked in quarantine and managed to talk his way out again, only to reveal himself as infected on the next turn and cause a lot of damage to the outpost.

While I’d suspect that the more players the better, and it is especially fun to have enough players so you there are two infected players rather than one, it’s a clever and engaging game that just gets better the more players are willing to get into the spirit of accusation and counter-accusation. Everyone tends to get accused when you submit a negative die to a task – but did the player submit the die because they just rolled badly, or are they really the infected and trying to put a spanner in the works? That’s for the other players to find out!

In the meantime, you can keep the game components organised with this slightly-unnecessarily-elaborate-but-attractive foamcore box insert. Keep in mind in these photographs I happen to have two sets of player screens, as my original set wasn’t die cut and was quickly replaced by the good folks at Stronghold Games.