Lead an ancient civilization as it rises from its barbaric roots to become a world power.

I’m not sure if drafting games are really my thing, but 7 Wonders is already considered a classic and it is certainly not only clever and fun to play, but a new, more confrontational twist on the popular genre with lots of interesting and difficult decisions. Nice art too.

The wonderful foamcore box insert plan was designed by Jonatahn White and holds the base game and the following expansions: Leaders, Cities, Babel, Catan Civilization Board, Cities Anniversary Pack, Leaders Anniversary Pack and 4 other miscellaneous leaders. 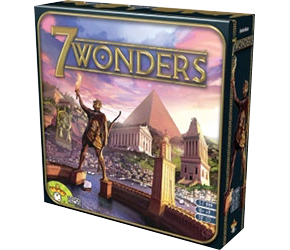