The early days of Games Workshop were a heady, thrilling, creative time, and I remember the excitement when I first got a copy of the new boxed game Adeptus Titanicus way back in 1988. This was something new—giant robots with interchangeable weapons battling it out on the tabletop! It even came with foam buildings! We played it quite a lot and it remains one of my favourite Games Workshop designs to this day. The brilliant Jervis Johnson (who still works at the company and also designed Blood Bowl) came up with an ingenious system of placing orders that is still fascinating and fun.

In Epic Magazine Issue #1, he very modestly says that the Adeptus Titanicus II rules by Gave Thorpe, which appeared in that issue, are superior, but I don’t agree. The placement of orders (first fire, advance, charge, and close combat) dictates the order of activation and the abilities of each titan on the battlefield, so choosing them is a crucial part of the game’s tactics. Thorpe’s rules just revert to the tried and tested turn sequence. I think Johnson’s system is far more engaging.

Well, now you can try them both out for yourself and decide. I sat down and, over weeks, created this epic (excuse the pun) rules summary and reference for both systems. This turned out to be a far more complicated and time-consuming project than I’d expected. First there were the original boxed set rules. Then there were the modifications that came in the Codex Titanicus expansion, released in 1989 and clunkily trying to weld together the original game and the new game of epic-scale Space Marine, and adding rules for Ork and Eldar titans. Not to mention adding a new damage system and a completely new set of close combat rules. This led me to Adeptus Titanicus II and its expansions, which appeared in the pages of the ten-issue run of Epic 40,000 magazine.

You’ll notice there’s no mention of other epic scale vehicles, robots, infantry, and weapons in this summary. That’s because the addition of titans to epic-scale armies was always an unwieldy one at this time (1988-2000). In fact, in issue #3 of Epic 40,000 Johnson gives up and declares Epic and Adeptus Titanicus separate games (with some crossover). It was always difficult to integrate the strategic play of big epic-scale armies with the detailed tactical play of battling giant robots—how successful it was in the later Epic 40,000 and Epic Armageddon rule sets I’m not sure, as I haven’t played them with titans yet. I also gave the Imperator Titan and Mega-Gargant rules from 1994’s Titan Legions a miss as they are integrated into the epic army rules; if you want to use these big miniatures Adeptus Titanicus II covers them.

So this summary focuses on the rules history of the original Adeptus Titanicus and Adeptus Titanicus II. Of course in 2018 GW released an entire new set of rules, designed to be played with huge, high quality, detailed titan miniatures, but it also restricted the game to those with equally huge pockets—I for one simply can’t afford to play the new system.

In contrast, the original Adeptus Titanicus came with six titans, the aforementioned buildings, and a selection of weapons, affordable due to one very interesting fact. Plastic miniatures were just starting to come out, but the expense of tooling meant that the original box could only hold one design of miniature; so GW came up with the idea of loyalists fighting rebels to save tooling another design. Thus was born the entire concept of the Horus Heresy, now a lynchpin of Warhammer 40,000 lore.

If you’ve got a copy of this classic, get it out of the attic; and if you don’t, proxy some miniatures and counters and give it a go! 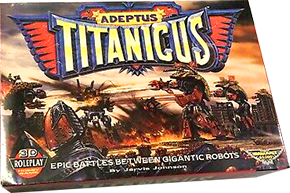