Magic the Gathering: Arena of the Planeswalkers

Be the last Planeswalker standing to win!

Everyone agrees that Heroscape was a fantastic game. Everyone except Hasbro it seems, who stopped supporting it. But I guess they had a million of the plastic desert hexes left over, because you get a few of them in every copy of Magic the Gathering: Shadows of the Planeswalkers.

You may detect a hint of cynicism when I talk about this game, because it’s basically Heroscape with some spell cards, it’s a transparent attempt to cash in on the name value of Magic: the Gathering, the cardboard map and wall sections are terrible, and let’s face it, we’re all still annoyed at Hasbro for dumping Heroscape. But in truth, this is a very good game. This probably proves how the simple combat mechanics of Heroscape have stood the test of time, but one can’t deny that the spells and summonings of this game do make for a much more interesting experience. Every Planeswalker and associated creatures have a distinctive faction feel, games are short and snappy, and it all hangs together far better than the bizarre agglomeration of allies you’d find fighting together in a game of Heroscape.

So, it’s great, surely Hasbro will support it with lots of expansions? Sorry folks, there were destined to be only two. Perhaps they finally did run out of plastic desert hexes…

You’ll find this clunkily-named game and its two expansions in the specials bins now, but if you do, grab them—they’re definitely worth adding to your collection. 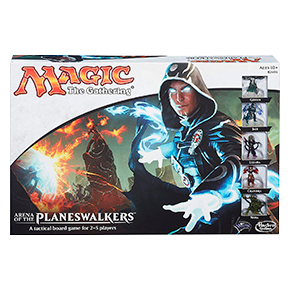