Miniatures gaming with all the serious mucking about taken out and all the fun left in.

What a great sound: a handful of dice being thrown across a plastic board. That’s not the only thing that brings back vivid memories of childhood when you play Heroscape, a return to ye olde days of big games with lots of plastic components. Sure, open that big brightly coloured box, see all the plastic bits and you might think we’re starting to cross over that nebulous line between game and toy here, but the important thing is, is it fun? You bet it is. If you used to play miniatures games but rapidly got sick of spending valuable game time reading all those intricate rules, mucking about with tape measures, and painting figures, then this is the game for you.

Heroscape comes in a big flimsy box bursting with plastic bits. You make up your board from snap-together 3D plastic hexes that come in a variety of types: grass, rock, sand and transparent blue water tiles. Choose your armies using one of the scenarios supplied or use the simple points system, and have at it! The figures are good quality and well-painted (though I shudder to think of the Chinese sweatshop where this is being made … someone out there is painting just the sword on a samurai figure then passing it to the worker on her left) and best of all, ready to fight.

There are Basic and ‘Master’ rules, but go straight to the easy-to-learn Master rules. There’s nothing new here; it’s roll for initiative, move, and attack, but simplicity is what makes Heroscape such a blast to play. The combat system is spot on: the attacker rolls a bunch of red dice and the defender rolls blue; every Shield on a blue dice blocks a Skull on a red dice; those that get through cause a Wound. This makes for a lot of enjoyable head-to-head dice rolling. Special abilities for different figures mix things up a bit.

Our first game was a fast and furious battle that came down to a close fight between our last two figures; and if you don’t enjoy a slug-a-thon between a WWII paratrooper commander and a robot that looks like it wandered off an episode of Dr Who, you’re not going to enjoy this game. Yep, the background rationale is flimsy—warriors gathering in Valhalla to slug it out over some mystical Wellsprings—but that’s not what this game is about. Hasbro were onto a winner with Heroscape’s flexibility and expansion potential, and many waves of extra figures soon followed the Master Set onto the shelves.

The perfect ‘beer-and-pretzels’ wargame. Four and a half plastic hexes out of five. 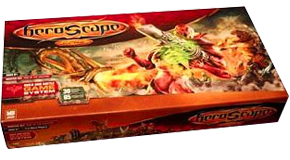