The very air thickens with a sense of foreboding that roils like an acrid mist through the streets. The Ancient Ones are stirring …

Without a doubt, the most well-known and most-played of boardgames based in the worlds of H. P. Lovecraft is Arkham Horror and its many expansions. The original game, by Richard Launius, was published in 1987 by Chaosium, but in 2005 Fantasy Flight Games released this completely revamped version that took the gaming world by storm and continues to be one of their most popular games. Set in Lovecraft’s fictional city of Arkham, players control 1920s characters who co-operate to roam the city gathering items, skills and spells in an attempt to close a series of otherworldy Gates that are releasing a tide of horrific creatures. Eventually, if they fail to stop the inexorable progress of the Doom Track, a Great Old One (GOO) itself may be released, which the players have a (very small) chance of defeating.

Arkham Horror has been criticised for not really capturing the unique atmosphere of Lovecraft,due to its emphasis on combat, and the fact that, unlike in the stories, it is even vaguely possible to defeat a GOO in combat. But the fact remains it is a vastly entertaining game that is bursting with theme. Sure, it’s incredibly random and sometimes ridiculously difficult, but it really is one of the closest experiences to a role-playing game session that a boardgame can provide. The huge amount of supplemental material makes it endlessly different and engaging, and it can also be played solo.

FFG has continued to support Arkham Horror with a steady stream of expansion sets—so many in fact, that it would be difficult to find a table big enough to play them all at once! The ‘big box’ expansions—Kingsport Horror, Dunwich Horror, and Innsmouth Horror—bring extra boards for those cities so the players can travel to these unique locations, lots of new components, and quite a few extra rules as well. ‘Small box’ card-based expansions—Curse of the Dark Pharoah, The King In Yellow, Black Goat of the Woods, and Lurker at the Threshold—have brought more cards, characters and special rules into the game. The last expansion was Miskatonic Horror, which probably holds the award for being the only expansion to the expansions I know of!

Arkham Horror is certainly a beautiful, atmospheric game, though the rules can be a bit fiddly and it is very, very dependent on luck. Here’s a whole lot of stuff to make the experience smoother. The most popular and most perfected file (it’s up to version 7.1) I’ve ever uploaded to BoardgameGeek, this rules summary and reference pack includes all the reference material I have made for the game, and includes rules for all the currently available expansions. It’s also both an ‘all-in summary’ and in modular form, depending on how you like to mix and match your expansions. 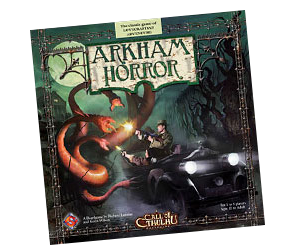