The game of epic naval battles

One of the old and beloved games from the early Games Workshop days was Man O’War, a fantasy tabletop naval wargame. It’s long, long out of print, and the miniatures cost an absolute fortune on Ebay these days, and going back to look at them they don’t really stand up to modern standards—paper sails and all that. However, Mantic has stepped up to fill the gaping hole left by this game and released Armada (a strange choice of a name, given the popularity of FFG’s Star Wars: Armada)—and it looks fantastic.

The rules are based on an existing naval wargame called Black Seas, and look pretty straightforward and easy to learn and play. There’s a paper sea mat provided, (of course I’ll be substituting the large cloth I got with GW’s short-lived Dreadfleet game, which I use for all naval war-games), a 96 page softcover rulebook, shipyards, dice, and counters. But the ships! That’s what we’re all here for. The two player starter set contains eight gorgeous resin ships, four for the human Basilean fleet and four for the orcs. They’re straight-up classic fantasy designs, down to the crazy orc mechanical constructs (drills and hammering metal fists for prows). Apart from these two fleets, already available are dwarves and the Empire of Dust (Egyptian-themed undead). I’ve just finished painting my starter set models and they look spectacular, and it’s great to see fully modelled sails and big, impressive ships on the roiling seas of my old Dreadfleet sea mat again.

Here’s my rules summary and reference—and check out the battle report video! 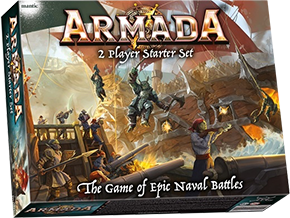