Conflict between Orks and the Imperium for control of the Imperial hive world Armageddon.

Another in the trilogy of counter wargames produced by Games Workshop in the early nineties, this one enacts an ork invasion of an Imperial planet. A fun game in the old style, before every counter in games had to be a plastic figure! 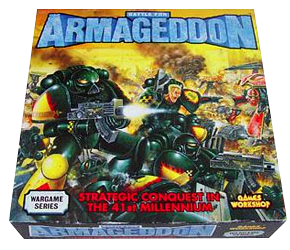