Do you have what it takes to be a highway warrior?

Remember those classic road combat scenes in Mad Max? Ever felt the urge to flip the little red plastic switch mounted on the dash and send a rocket at that idiot that just cut you off in traffic? Tried go-cart racing and got in touch with your inner hoon? Fallen prey to road rage? You’ll love this game. Battlecars is a forgotten classic from the golden age—the 80s—of Games Workshop games, before the company became a billion-dollar giant churning out miniatures for kids with parents with extremely deep pockets. Battlecars is simple, fun, and incredibly cinematic.

What do I mean by cinematic? Well, it’s when a game is not only fun to play, but during the course of the game a little story develops, and you find yourself effortlessly filling in the game mechanics with imaginative, and usually hilarious, descriptions of what’s going on. For example, I recently played a game where one player abandoned his car, which was then rammed by the other player. The pedestrian shot at the attacking car with his machine gun, missed, was missed in turn by the car’s weapons, and then made a move and was shot and killed by the car on it’s next turn. End of game. But as we played you could easily imagine the driver scrabbling for the door handle as the other car sped towards him, just making a frantic dive onto the road as his car was rammed, then shooting as the driver desperately rolled up his armoured window just in time, and the look on his face as the car’s machine-gun turret slowly turned in his direction … as he makes a frantic run for the trees, the car slams into reverse and swings around to pepper him with bullets … you get the idea. A little Mad Max scene, only a lot funnier.

A Battlecars game usually ends up with cars spinning, smashing or blowing to smithereens, and drivers making a run for the nearest building to escape the mess. The game comes with two generic boards crossed with movement lines, counters for grass, trees and buildings and some car templates that slowly get covered by (somewhat fiddly) red counters as they get more damaged, and on which the player places counters for various weaponry—rockets, shells, flame, MG rounds and perhaps a clutch of passive weapons such as smoke, spikes and oil. A supplement, Battlebikes, adds rules for armoured bikes.

Score a copy of this gem on eBay, you won’t be sorry. And this way, no one gets hurt. Four and a half rocket launchers out of five.

I like this game so much I remade it at Matchbox car scale (though I later decided to use 6mm scale cars and bikes from Irregular Miniatures). The new templates have been completely redrawn for a modern look—laminate them and use a whiteboard marker to mark damage—and the playsheets combine the car/bike sheets with their appropriate driver sheet plus modifications specific to that car/bike. Also includes graphics and instructions for making your own ‘speedometers’. The templates are in colour-coded and ‘classic blue’ versions as well.

Cars That Do Battle

Fellow Battlecars fan Chris Morse sent me his revised version of the game, cunningly title Cars That Do Battle. He even got the permission from Games Workshop to make it available to you! Using my new templates as a starting point, Chris has ingeniously simplified and consolidated the rules so almost everything you need to play is on your car template. And he’s saved a lot of time and fiddliness by giving the cars standard weapon loadouts. His brilliant system is available below in PDF for free, along with a new battle map, and industrial estate, to fight on. Note this is designed for Micro Machines scale cars, trucks—and a tank. See you on the highways! 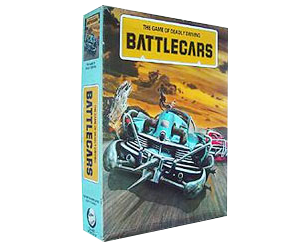