The game of gladiatorial sports mayhem.

We’ve had two ‘seasons’ of Blitz Bowl already and while this one is pegged as the Ultimate Edition, we are missing some of the stuff in the last season box – for example the ball deck and the league rules. And we’re getting the same human team for the third time. A missed opportunity to put everything in one box with some brand new teams, but apart from that this is still a great little game that gets high praise – and some say it’s even better than its older sibling Blood Bowl, being faster and easier without the rules overhead. Plus it adds the extra wrinkle of the challenge cards deck, which give players a whole bunch of in-game goals that can be achieved to score points.

I can see myself getting this one on the table far more than Blood Bowl, which I keep buying editions and teams for but never getting around to playing! Luckily cards in the set let me use my old teams in Blitz Bowl. 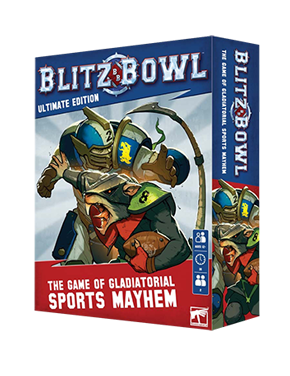