Being just a bit OCD as I am (in a good way), I feel a need to create a rules summary for every game in my collection, so I can take it from the shelf and play it at a moment’s notice. A game that’s been neglected until now is Block Mania (and its multiplayer expansion, Mega Mania), from way back in 1987. At the time Games Workshop had a licencing deal with the venerable British comic 2000 AD, and published a Rogue Trooper game, a Judge Dredd RPG, a Judge Dredd boardgame, and some miniatures (I have the Judge Dredd mini and Judge Dredd on a bike, and the sculpts still hold up well today).

Block Mania is by Richard Halliwell, responsible for the first edition of Space Hulk, Rogue Trooper, and the car combat game Dark Future, among other things. And now I must admit that even though I bought this game in 1987, I’ve never played it. Not once. It looks fun however, and incredibly thematic (you probably need to know your Judge Dredd comics to really engage with the theme, but check out the excellent 2012 film Dredd with Karl Urban). The game represents a ‘block war’ in Judge Dredd’s dystopian future city of Mega-City One: two huge habitation towers going at each other in open warfare until one or both collapse. Possibly not a theme that is going to be revived any time soon in this post-9/11 world. As grim as the underlying theme is, there are many layers of satire and crazy humour over the top of it, which I suppose is a pretty good description of the kind of distinctively British humour I grew up with, and still prefer.

So, it took a long time, but here’s my rules summary and reference for Block Mania and Mega Mania. Perhaps now I’ll finally get it to the table! 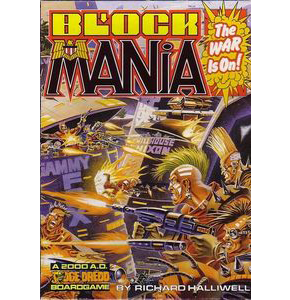