As an orcish general, muster your unruly troops into three battle lines with a standard at the front and a musician at the rear.

A fast, fun card game of ‘orcish mayhem’, this 1987 Games Workshop game is a good beer and pretzels bash. It’s been a long time since I played it but now I’ve made this shiny new rules summary and reference sheet, I’ll bring it out again! Recently revised and re-released by Fantasy Flight Games. 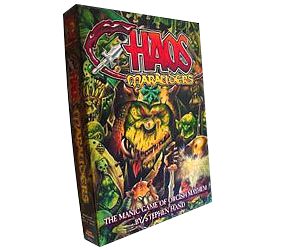