A medieval city destined for greatness, immense power and importance beckons you.

Citadels is enjoyable card gaming at its best, a fantastic little game that deserves a place on every gamer’s shelf. It’s also, I believe, the first game I designed a reference sheet for.

In 2016 the game was expanded and re-released by Asmodee, and the box now contains a huge variety of characters all built on the same simple, fun set of mechanics.

In Citadels the object is to build a medieval city of eight districts before the other players. The twist is, each round players secretly choose from a deck of characters (the Assassin, Thief, Merchant, King, Architect, Warlord, Bishop, and Magician were the originals, but many more have since been added), each with special abilities. The deck is passed around and roles chosen, and they’re revealed in a set order, so part of the game is guessing what your opponents have chosen and bluffing about which role you chose. Once you’ve taken your action—anything from ‘assassinating’ another player (they miss their turn) to destroying one of their districts—you can take gold or build a city district. The first player to build eight districts ends the game and points are totalled.

Citadels is a lot of game value in a little box, surprisingly strategic, and always a huge amount of fun for newbies and experienced gamers alike. It can also be played with up to eight people, and with as few as two (though it’s probably best with five or six).

Here you’ll find rules summaries and reference sheets for both the original edition (including the Dark City expansion), and the 2016 version. 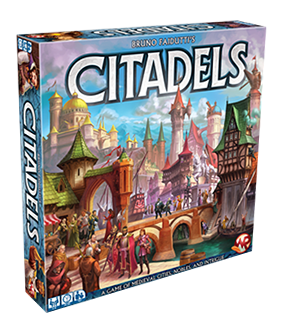