A game of survival and negotiations in a world full of zombies.

Expanding on the systems of Mall of Horror, City of Horror also pushes the zombie-killing into the background and brings to the foreground the far more enjoyable and interesting deal-making, treachery and general bastardry that takes place when human beings are in a high pressure survival situation. Which means it’s a wonderfully entertaining game, though you really have to play it with people who don’t hold a grudge. Because when the going gets tough the only way to hold off those zombies is to push someone out the door to be eaten. It’s harsh, but fair.

It’s a lavishly produced game (though that cardboard water tower is a little shaky; I bought and painted an MDF one to replace it), and while the number of icons involved might be daunting at first, it doesn’t take long to remember who does what. Soon you’ll be working out how to grab those antidotes and action cards and who is going to be zombie meat. The great thing is, at the start of the game you have a hand of action cards and plenty of bargaining power, but as the four turns tick by, you run out of options and ways of saving yourself, and that granny character starts to look like a bit of a liability after all. It leads to some hilarious moments, agonising sacrifices and those times at the table when you realise you’ll never quite trust that friend of yours ever again … highly recommended. 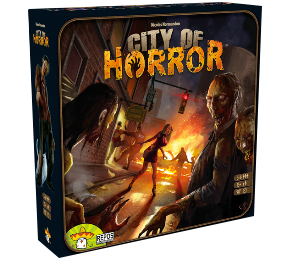