A game of survival tactics, as humans battle an incursion of demons in the underground of New Jerusalem.

This dungeonbash game from Asmodee has everything going for it except its strange, underselling name. Lovely production, some of the best pre-painted figures I’ve seen (even if the troglodyte figures are a little, well, non-threatening), and a system just different enough to bring something new and fresh to the genre.

In keeping with the high expectations of gamers these days, the plastic figures that come with the game are pre-painted, so you can dive into a stunning game experience right away. Claustrophobia is set in the alternative fantasy world of the miniatures game Hell Dorado, and features 17th century warriors delving under the city of New Jerusalem to battle demons from the depths of Hell. The game comes with several scenarios and more were released online, and it has some interesting new mechanics that freshen up the genre. It’s certainly a worthy entrant into the rich genre of dungeoncrawling, and shows that this particular style of boardgame is showing no signs of becoming less popular any time soon.

This rules summary and reference includes the rules from the De Profundis and Furor Sanguinis expansions.

For the updated version of this game, visit the separate listing: Claustrophobia 1643. 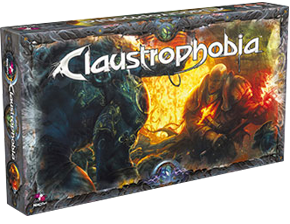