A miniatures-based survival game set within the catacombs.

The original Claustrophobia was a fun game, but the inclusion of pre-painted miniatures meant that it had a very limited set of creature minis in the box. There was also something a little too random about your level of choice in the game; you roll dice and (for the adventurers) select a line of stats or (for the demon player) various actions, and certainly as the demon player I always felt controlled by the action board rather than the other way around.

Thankfully all the problems have been cleared up with Claustrophobia 1643, the new version now by Monolith (makers of Conan). There’s now an impressive array of creepy monster miniatures and a host of scenarios to go with them. And the rules have been tweaked to give the players more agency, and the demon player more control. It all adds up to a better experience in my opinion, enhanced by some brave graphic design choices that, for the most part, work well to create a unique atmosphere. And I’ve always loved the dark Hell Dorado theme of 17th century-meets-Hell-and-invades-it.

Now, I’ve got an old version and two expansions to get rid of!

For the original version of this game, visit the separate listing: Claustrophobia.

Making these game aids takes time and money. If you find them useful, please consider becoming a regular supporter (via Patreon, or directly), so I can continue making high quality tabletop gaming content. Thankyou!
Claustrophobia 1643 Rules Summary and Reference v1.1 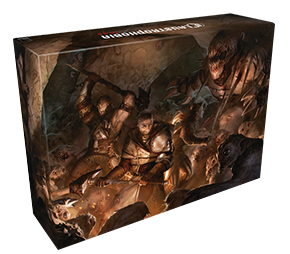