Cleopatra and the Society of Architects

Will temptation drive you to the worshipers of Sobek, and to a violent end in the belly of Cleopatra’s favorite pet?

Days of Wonder make beautiful and fun games that don’t strain the brain and are perfect to play with a few friends and a few drinks. Production-wise, Cleopatra and the Society of Architects goes completely over the top—but I’ve never been one to complain about a little bit of overproduction! It’s also a visually stunning way to introduce newbies to the world of boardgaming.

Cleopatra is a great game to play with non-gamers as well, as the rules are easily picked up. It basically follows the Ticket to Ride model of collecting cards in order to get points, only instead of building train routes across America or Europe, you’re an architect in ancient Egypt building parts of Cleopatra’s palace. First, you turn over the box and it becomes the framework of the palace, along with two boards that go on top of and in front of the box. The players can visit the market (draw cards) or trade combinations of their artisan, stone, marble, lapis-lazuli and wood cards for plastic pieces that are placed on and around the palace—a processional of sphinxes, two obelisks, the main doorframes, the walls of the palace, garden mosaics and the pedestal and throne—receiving money, or talents for each piece they build.

There are ways of speeding up the process with special cards and cards with double the usual number of resources, but they’ll cost you Corruption Amulets, as you participate in shady deals to get ahead of your architect rivals. Your Amulets are kept secret in a cardboard pyramid and revealed at the end of the game, and the most corrupt of the players is immediately fed to Cleopatra’s pet crocodile—or, in less prosaic terms, loses. The richest of the remaining players wins the game.
There are ways of getting rid of Corruption however. Occasionally, an ‘Offering to the Great Priest’ may be made, where players blind bid Talents in an attempt to lose Corruption. And you can build Sanctuaries in the palace garden where Corruption Amulets are placed at game end.

In our first game, I managed to come out the richest architect—but unfortunately also the most corrupt. Pet food.

Cleopatra is a fun game, and well worth purchasing. Some die hard gamers might wish for more choice and strategy and less luck, but this is a game for the family and for a bunch of friends spending an enjoyable hour together. The rules are simple but I’ve whipped up a one-page rules summary that includes the official two player rules.

Cleopatra and the Society of Architects Rules Summary v1 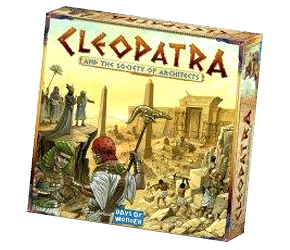