Conquest: The Last Argument of Kings

A mass battle wargame set in the world of Eä.

I wasn’t planning to add another mass battle wargame to my collection, but there’s always something tempting about diving into another system and another world. Para Bellum have developed a new fantasy world and a huge number of impressive miniatures in record time, and when I contacted the company and they were enthusiastic about a collaboration, I could see I was going to get hooked.

Before too long a big box full of miniatures hit the doorstep and I began unboxing, constructing, and painting. And playing, of course! I’ve played several games now, and despite some slight difficulties with the evolving rules, it is great fun. There’s something particularly enjoyable about pushing around units all ranked up together in neat formations that takes me back to old school Warhammer Fantasy Battle and more traditional tabletop games. Conquest does hearken back to these types of games and doesn’t make too many concessions for beginners, but it also has a few innovative systems and flows nicely once you get the hang of it.

It took me a little while to get used to the larger scale of the miniatures, but now that I’ve finished painting the miniatures from the starter set (and added some extra units) there’s no denying how impressive they look on the tabletop. Para Bellum have developed their own manufacturing and supply chain, and there’s a noticeable improvement in quality between the starter set minis and later releases, so it’s great to see the minis are getting better all the time.

I had the opportunity to chat with the company CEO and his enthusiasm, dedication and excitement came across very strongly, and it’s always good to see new companies taking on the big boys in the fantasy wargaming field. Be sure to check out the Para Bellum website, where you’ll find lots of information on the game background and its factions, plus an online army builder. So far there’s a human army, a weird semi-alien army, some fiery dwarves, northern barbarians (including a huge giant), an orcish army riding dinosaurs, and there’s much more to come!

I’m looking forward to many more games of Conquest. Here’s my rules summary and reference, which incorporates the latest version of the rules (v1.5) and the June 2021 errata, and hopefully will make it even easier for new players to discover this game.

I’ve recently become an affiliate of Para Bellum, so do yourself a favour and click the following link, use the code ORDEROFGAMERS when you buy from their online store, and get 10% off on your Conquest stuff!

10% OFF CONQUEST
Making these game aids takes time and money. If you find them useful, please consider becoming a regular supporter (via Patreon, or directly), so I can continue making high quality tabletop gaming content. Thankyou!
Conquest: The Last Argument of Kings Rules Summary & Reference v2.1 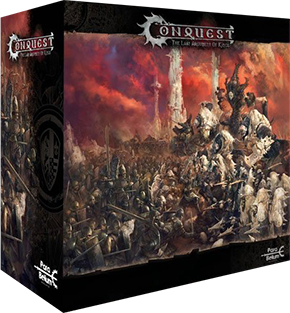