After reading a review ofCore Space it sounded like just the kind of thing I liked, and UK company Battle Systems Ltd were kind enough to scratch my sci fi miniatures gaming itch and send me a box full of goodies.

And what a pleasure it is to add this game to the EOG collection, because it is everything you want in a sci-fi skirmish game, smothered in a heavy thematic dose of Joss Whedon’s Firefly. Not a literal, licence-fee dose, but we’re definitely in that ballpark—trader gangs on the edge of space fighting to survive and keep their ship and crew flying; deals gone wrong, salvage, bar fights, and behind it all the ever-present threat of a relentless foe. In this case a bunch of robots intent on harvesting your biomass, name of the Purge. Which kind of sounds like the results of too many pints and a slightly dodgy curry, but we’re talking about a different kind of biomass here.

I just love everything about this game, from the old-school smaller scale of the miniatures (insanely detailed over-large GW minis are my bugbear at the moment), to the stunning cardboard terrain like Space Crusade on overdrive, the mousemat-material playmat, and the straightforward rules that still manage to be flexible enough to bolt on any number of role-playing-like enhancements. This is a miniatures game toybox, and you can play a campaign and beef up your trader crew through multiple engagements. Sure, setup time is considerable, but it’s worth it when you see you’re spectacular 3D play space of rooms and corridors, signage and control consoles, furniture and little crates with removable lids. And opening those crates to grab the equipment tokens inside during the game is a lovely tactile touch to the gameplay. But the thing I like most is the way the hostility tracker increases during the game, ramping up the tension level until the inevitable moment when the Purge start showing up and things get real. It may have been every spacetrader for themself up until then, but perhaps it’s time to start working together when the robots show up …

In my first game my opponent demanded that my captain drop the data chip everyone was after or he’d blow her head off, and the game is full of these effortless little roleplaying elements. It encourages thematic play by not setting hard and fast rules on who fights whom and who has to do what. And there are wandering civilians who can get caught in the crossfire or join in the mayhem, that rapidly take on their own distinctive personalities.

Core Space is a breath of fresh air in an overcrowded market, and I look forward to seeing more expansions, each complete with a handful of minis and some new terrain. Great stuff!

Of course I personally think no game is complete without an EOG rules and reference, so here’s one for Core Space. It doesn’t include the optional rules in the deluxe rulebook and expansions, but it covers everything in the core box and includes some extremely handy skills and icon reference sheets. 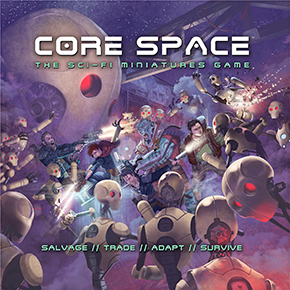