The Old Ones have risen. Monsters walk the Earth. Humanity is finished but the struggle continues.

Sandy Petersen, well known for his venerable roleplaying game Call of Cthulhu, rose out of the primal oceans like Great Cthulhu himself with this huge game and an equally huge Kickstarter campaign to publish it. $1,403,981 flooded in and his dream to make a monstrously over-produced, incredibly expensive boardgame was on its way to becoming a reality.

Get past the truly excessive amounts of plastic and the sticker shock, and thankfully a very good game is waiting to enfold you in its tentacles. It’s eldritch ‘dudes on a map’, but a plethora of special abilities (‘spellbooks’) and a simple balancing act of gaining and expending power result in a satisfying strategic slugfest.

But the figures. Oh the figures. They’re beautifully sculpted and satisfyingly chunky, and as they begin to crowd the board to the point where you can hardly distinguish between the areas you’re fighting over, you can’t help but giggle insanely to yourself at the insanity of the plastic excess. Which is very appropriate for the theme, really. I do wish that the production values had extended to thicker card components, the rulebook is bordering on unreadable with its tiny reversed-out type, and the thick storage tray is great for storing the biggest, less-easily-damaged figures and completely abandons all the other figures to the crammed corners of the huge box, but these are minor quibbles explained away by the inexperience of the publisher. Just look at all that plastic and you’ll feel better. Look at all that plastic …

Oh, and if you still haven’t had enough plastic, there’s a tidal wave of expansions available.

The latest version of my summary is from the ‘Omega Edition’ of the rulebook. 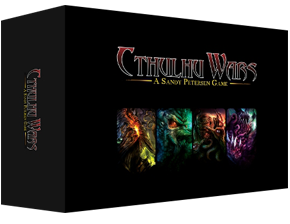