How do you kill an immortal god?

I gave this one a miss when it first ran on Kickstarter – not another Cthulhu game with lots of miniatures! But over a year later I’d read good reports and I decided to grab a copy (and the season 2 expansion). It turns out Death May Die is a fun dicechucker and definitely worth having.

There’s the DNA of Lang’s previous design The Others and its corruption track here in the way that the more your character loses sanity, the more powerful they become. The rules are straightforward and the variety comes from mixing and matching different ‘episode’ packs and different Elder One ‘big bads’. That’s the Daviau influence: the individual cardboard packs with their sets of cards and counters. It’s big, random, silly monster-bashing fun of the kind that would make Mr. Lovecraft spin like a top in his grave, and in classic fashion there’s a big dust up with the biggest big bad at the end.

The production is of course exceptional, with Adrian Smith illustrations and horrific Mike McVey miniature sculpts. My only bugbear is the size of the map tiles; it’s quickly apparent that since you can have any number of miniatures on a space, and monsters tend to follow you around like a tentacular conga line when you move, the tiles just aren’t big enough for the job.

Cthulhu: Death May Die doesn’t particularly do anything new, but what it does do it does well, and it’s the kind of fun, thematic game that will give you a good laugh and inspire you to make silly sound effects while playing. 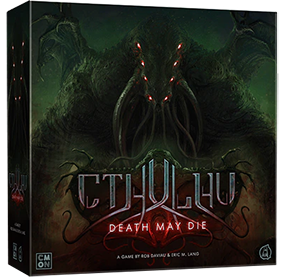