Demonic invaders have broken through from another dimension into the Union Aerospace Corporation’s Mars base!

Proving how popular boardgames have become, Doom is based on the best-selling computer game and captures its tense, claustrophobic atmosphere. For my money far more entertaining, and sociable, than the original.

Anyone who has any interest in the history of computer games has heard of Doom, the game that arguably kicked off the craze for first-person shooters. Recently Doom 3 was released to great fanfare (and sales).

But for those of us who prefer our sci-fi demon killing mayhem in good old-fashioned boardgame form—more sociable, more fun, less stress—Fantasy Flight Games have released Doom: The Boardgame. If you’ve ever played and enjoyed such games as Space Hulk or Advanced Space Crusade you’ll be in familiar territory with Doom. Your marines explore the corridors of a dark, bloodstained complex, fighting off all manner of huge ugly beasties with an array of satisfyingly effective weaponry.

FFG have pulled out the proverbial stops with this game, and it shows. The big box is chock full of corridor and room sections, beautifully illustrated and printed on thick, hard wearing card. There are 66—count them, 66—figures with which to fight your battles, nicely modelled in plastic and some of them huge. Prepare to use hot water to flatten the bases of these figures as the plastic is somewhat bendy. If you enjoy painting your miniatures there’s plenty to keep you occupied here, but even a few simple coats of paint and some dark washes will improve the look of your games immeasureably. Finally, numerous counters, cards and reference sheets fill out the box. This is definitely one of the more satisying ‘rip off the shrink wrap and rummage happily through your new game’ moments I’ve had for a while!

The gameplay lives up to the quality of the components; Doom is a pleasure to play. The games can last a bit long—our last game clocked in at about five hours—but without the ‘game fatigue’ that usually results, thanks to the easy and enjoyable mechanics. The game also uses an innovative dice-rolling system—one roll with a number of multi-coloured dice tells you the range of the shot, the damage, and even if you run out of ammo—and it features various scenarios that increase the story-telling aspect of the game. The creature player sets out the board pieces, opponents and pick-ups as the marines discover them, along with ‘spawning’ extra creatures with the play of cards. Some reviews have concluded it’s too difficult for the marine player(s) to win, but I’ve found the game balance to be about right; and FFG have recently made available a downloadable expansion that allows players to set the difficulty level.

Doom is a lavishly produced, highly enjoyable game that fans of the 80s ‘big box’ games like Space Hulk and Heroquest will especially love. And it may even bring a few trigger happy video game players into the world of boardgaming. Don’t forget to pick up the essential expansion set. 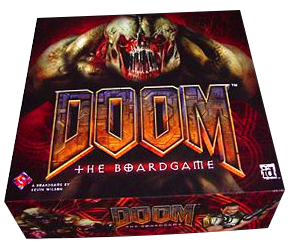